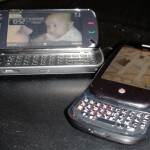 As a mobile gadget guy, I was interested in the iPhone alternative and trying to find a phone that defines me as “me”. It was cool when I was carrying the iPhone 2G in Toronto since no one had one, but now it’s just so common to see someone pull out an iPhone 3G or 3Gs from their pockets and haplessly try to tame the touchscreen beast.

So why did I decide to run out on day one to the Palm Pre rush? One, we were doing development with the Pre; and two it was cool that I was a part of the Pre rush! With all the signage saying “Pre-order your Pre”, I thought it will be another phenomenon like the Android and iPhone. It turned out to be a bit of a bust. I walked into my local Best Buy desperately trying to get someone’s attention to sell me a phone, there was only 1 salesperson at that point and she was helping this lady who was trying to buy something like the Pre, but not willing to pay full price for the phone (can you say cheap?). A second sales guy arrived and tried to sell me the phone but didn’t know how to go through the order system (ummm.. is this a PDA phone or 1X? What plan can you attach on a phone with no contract?), but 20 minutes later I got out with the Pre.

BTW: whatever Pre-sales training they had, they didn’t know how to activate the phone or even turn it on. It was frustrating to see the sales guy brutally destroying this beautiful package.

Overall – it’s a cool phone, but it’s a bit PREmature and rough around the edges (no pun intended for both). It’s really the only real alternative to the BlackBerry for Bell users. It won’t save Bell (or Telus when the exclusivity is over) from losing customers to Rogers or Fido. CDMA/EVDO is dead.